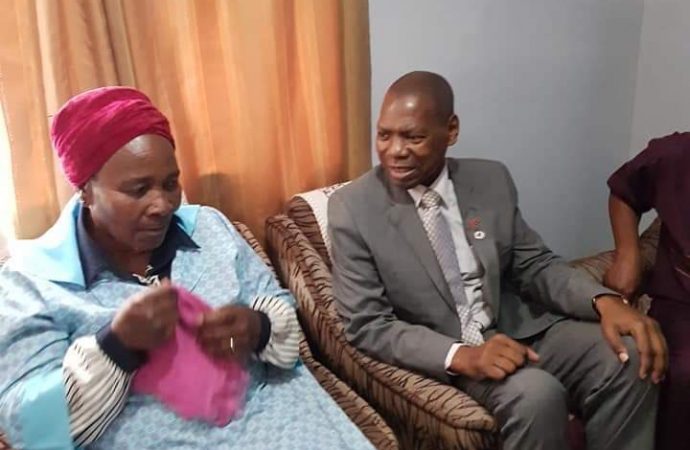 A picture of ANC NEC member, Dr Zweli Mkhize, went viral during the election campaign for the 2019 General Elections. In the picture, the now Minister of Health is seen walking out of a dilapidated dwelling and social media critics went to town ridiculing his visit as nothing but a vote-fishing exercise and he would never remember the plight of the elderly lady who lived there, let alone take action post election.

On Tuesday Hammarsdale welcomed the Minister of Health, Dr Zweli Mkhize, as he handed over the keys of a new house to Mrs Khumalo, the elderly lady whose rickety dwelling he had visited in Georgedale.

Dr Mkhize was on the election campaign trail earlier this year in the lead up to the ANC Manifesto launch rally when he visited Georgedale, and found Mrs Khumalo living in a dilapidated house. When his pictures emerged on social media, they drew criticism against the ANC leadership. However Fikile Mbalula, in his capacity as ANC election head, came out in Dr Mkhize’s defense saying it’s important for the ruling party to visit the poor so it can see how it can help.

At 8 am on Tuesday morning, Dr Mkhize was accompanied by donors from the International Organisation for Relief, Welfare and Development. Mr Sheik Walid Al Saad, who heads IROSA, accompanied Dr Mkhize as well as the ANC Councillor, Cllr. S’bu Ngcongo.

Dr Mkhize is known for his deep regard of elders. He has honoured his commitment to assisting Mrs Khumalo. “I am deeply grateful and honored for the assistance of Mr Sheik Walid Al Saad and his team. We could not allow an elder to live under those conditions and the sponsors did not hesitate to come on board.”