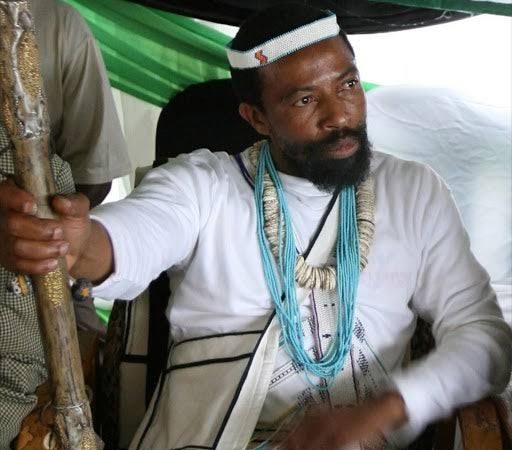 King Buyelekhaya Dalindyebo dropped a bombshell on Tuesday when he denounced paternity for the “son” who has been acting as King of AbaThembu ever since the King handed himself to prison authorities to serve a lengthy sentence for various crimes he had been convicted of, this after losing appeals against sentencing.

In the text message written in IsiXhosa, the King details various shocking claims about the paternity of the former acting King. The certificate of acting kingship expired in March.

HotNews called King Zwelibanzi, his official salutation, and he confirmed being the author of the text messages that have gone viral on social media.

Speaking exclusively to HotNews, the King disclosed that Azenathi’s mother fell pregnant before he took her as a wife. “I was surprised when she informed me about the pregnancy as we had taken necessary precautions but I decided not to voice out my misgivings at that stage”, said the King.

The King proceeded, “As the boy grew older there was a noticeable change in his behaviour towards me. My suspicions were confirmed when he and his mother insisted that his initiation be done at his mother’s maiden home in Ngqamakhwe. I later learnt that his biological father was present at the ceremony”.

The King shared the name and picture of the man he alleges is the biological father. As he passed away a few years ago, HotNews elected not to publish his name or picture.

At the time the King was about to commence his prison sentence he astounded many when he refused that the son many knew to be the heir should be the one acting as king during his jail sentence. No reason was given at that time.

The King has now confirmed that he tried to convince the Royal Family not to appoint Azenathi as acting King on the basis that he was not of the Dlomo clan but his pleas had fallen on deaf ears.

King Zwelibanzi sent a text message to his ex-wife demanding that they go for a DNA test to prove his claim that Azenathi was not his biological son. HotNews received a copy of the message from the King.

The King confirmed that by the time of publication no response had been received from his ex-wife, Buyiswa Majiki, who is also an Eastern Cape Judge.

King Zwelibanzi also sent a text message to Azenathi, published in full below:

In the message, wholy written in IsiXhosa, the King informs Azenathi that he is not his son and that he has asked Majiki for the three of them to undergo a DNA test.

He further instructs Azenathi to gather all his belongings, including livestock, and leave the Bumbane Great Place and go to his mother’s house, his biological father’s home or his mother’s maiden home.

Upon receiving no response from Majiki for the earlier message, King Zwelibanzi sent another scathing message to her, also published in full below:

I would like to remind you that we divorced officially in court at your instance.

May we not entertain any matrimonial relationships as a talk that would misconstrue your identity outside marriage.

The only thing that compelles me to speak to you is that you broke into my house with your son.

I am aware of your abuse of office to earn protection in your mischievous greed to quench your undying thirst for Gold Digging and sinistrous social climbing manouvires.

Be aware that your child has got 3 alternative

I humble my self requesting you to take your son and his belongings to gether with yours and vacate my premises before the end of this month.

I need to occupy my Home as soon as possible.

Your cheap sarcastic diplomacy is no better than Ratax that no longer kills Mice and rats and I simply feel you are behaving like rats in my compound and harry in my pocket in you misunderstand the harry in my pocket, for your benefit it means you are a kleptomaniac thief together with your son.

For a long time I thought I was dealing with humane hearts in sanity only to find myself dealing with headless chickens, only good enough for pig feed.

Judges like your good self only belong to garbage bin of law society.

I would like to emphasize that shameless as you are in your actions you are nothing in Royalty so is your son.

Please don’t be nonentities and pipsquicks that seek to build castles in the air.

Royalty is not a Brothel for your ambition.

I hope this is in order.
Do whatever you want to do in your abusive power to get out of my life and premises.

Thank you in advance for understanding

HotNews sent messages to both Majiki, the ex-wife, and Azenathi. The messages were read but no response was received at the time of publication. This story will updated should responses be received.