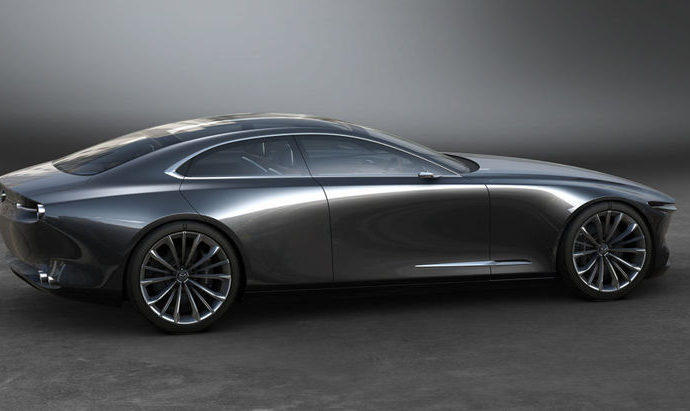 Mazda is committed to going big, in every sense, with its future product portfolio.

The Japanese brand is best known for its compact hatchbacks, crossovers and SUVs, but there is a new rear-wheel-drive architecture that could change everything.

Mazda realises that large cars command larger margins, and it is keen to profit from luxury vehicle buyers. That means a new vehicle architecture and prioritizing rear-wheel drive.

For traditional driving enthusiasts and fans of the brand, the thoughts might turn to a revival of RX-7 or RX-8, but don’t expect these new large Mazdas to have a sportscar centre of gravity.

Sales targets are ambitious, with Mazda desiring to produce 300 000 of these large rear-wheel-drive vehicles, as part of its annual sales, by 2025.

Mazda’s brand image has benefitted from not following all other Japanese brands, bar Subaru, into chasing additional sales volumes in developing markets, by producing cheap vehicles, below the Mazda2. This has enabled the brand to retain a better overall balance in terms of perception, regarding its product portfolio.

Product strategists at the Japanese company are obviously keen to leverage its standing into chasing the German premium brands, in the large crossover and SUV market.

Big vehicles require big engines and Mazda is developing an inline-six engine architecture for its new vehicle platform. Capacity is expected to vary from 3- to 3.3-litres, with the differences in capacity most likely due to an increase in stroke instead of bore, as Mazda’s engineers will certainly prioritise torque for these new engines.

The Mazda Rotary Engine is Back