Can courts be trusted when presided over by texting magistrates and sleeping officers? 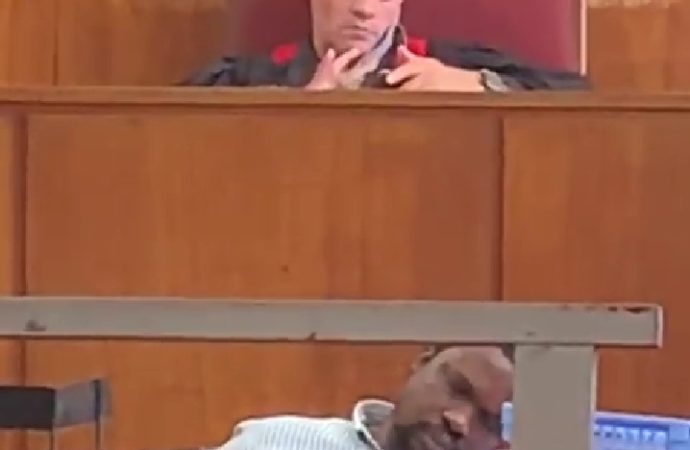 Members of the public are spitting fire after a video taken inside a courtroom in Cape Town went viral. The magistrate is busy on his phone texting while court is in progress and one of the court officers is fast asleep.

An irate member of the public confronted the magistrate and he was extremely rude and saw nothing wrong with what he did.

HotNews was sent the video and a Facebook post of the person that was incensed by the gross dereliction of duty. Below we publish what we received as is, unedited:-

Yesterday I was in Goodwood Magistrates Court. The sitting magistrate of court B: S.Lea and court officials are unprofessional, disrespectful and blatantly abusing taxpayers’ money and the privilege of being employed. The magistrate is condescending and irritable when cases are presented before him. Most of the time he was engaged on his cellphone even while cases are presented that require his undivided attention.
Everyone was shocked at his lack of interest which was not only offensive, but so blatantly disrespectful of the impact it has on the lives of those he has authority over. And their families. In my presence, the punishments he meted out did not match the merits of the cases presented. He was irritated and mouthing to the prosecutor Mr Meyer that he wanted to go on lunch. Like a belligerent child, he rushed through the presentations, barely containing his impatience. And nobody dared to say a word.
I decided to film him doing the old-guy one finger typing while the one court official known as Happy Mbabane was sleeping during the trials.
Of course I raised my concerns when court was dismissed: I confronted the prosecutor Mr Meyer for benefiting from a distracted magistrate whose lack of apparent interest leaves wide ranging opportunities for success.
I confronted Happy who chose to be verbally abusive when I told him he’s not getting paid to sleep in court. He became much more amenable when I told him I have it on camera.

First though, I confronted the great S.Lea himself. I believe it’s Shaun/Sean from newspaper articles that paint him with a much more generous brush of judiciousness than I have witnessed with my own eyes.

I told him that I was in court and that I recorded him texting and chilling. I asked him how it was possible to pay attention to the lives of people presented in the form of cases in front of him. And that it was clear from the results of the cases I sat in on, that he was in no great shape at all. Wow, the frothing at the mouth, the red eyes and shaky frame that emitted all the shouting and defensive screaming at me in the corridor was a sight to behold. Unstable and extremely scary. It’s been a long time since I was spoken to in such a manner. But it aligned with the profile of the man completely and totally.

Mr Lea shouted that he was texting his boss Mr de Beer. Showed me the WhatsApp chat briefly. Asked the secretary to take a pic of the screen and did not want to consider THAT HE WAS NOT MEANT TO BE ON HIS PHONE AT ALL. I guess nobody has had the temerity to confront him about this until yesterday. He tried shoving his phone in my face in front of everyone and I told him to back off from me as his aggressiveness was threatening. He scoffed and blew me a kiss before marching off. He left a shocked audience in his wake.

Of course it was Friday afternoon so I took the time to gather names during that convenient graveyard shift of those in the comfortable government employ.

I wish to share this story and videos as far and wide as possible. We need to expose those who are allowed to build empires after “32 years on the bench” as I was told. Nobody has the right to play with lives in the casual manner that this man and his cronies have decided is acceptable.