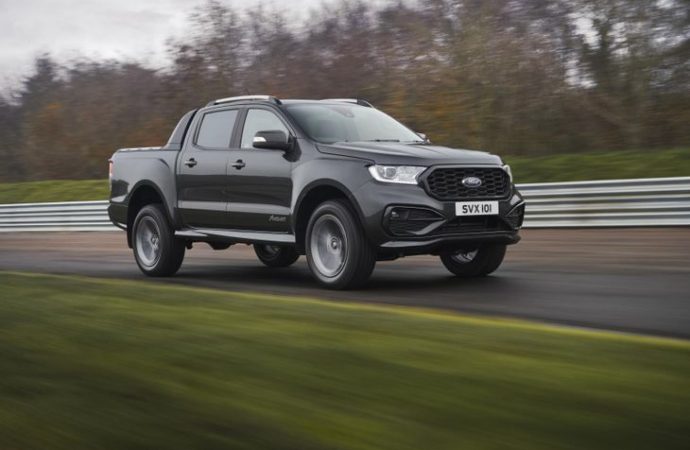 The modified bakkie scene continues to grow from strength to strength. Ford Europe announces an exclusive Ranger developed in partnership with MS-RT.

The bakkie tuning market is big business, but the fear of a compromised warranty is still enough of a deterrent for many. What if an OEM could work with an aftermarket company and develop a factory-backed offering? That’s just what Ford Europe has done with vehicle design specialists MS-RT. MS-RT has a track record of creating some wild Ford Commercial vehicles, like Transit vans, but the new Ranger project looks to be its coolest.

Using a Ford Ranger Wildtrak as its base, the Ranger MS-RT features a hand-built front fascia featuring a honeycomb carbon fiber-effect grille and integrated fog lights. There are extended wheel arches and sculpted side skirts too, adding to the visual appeal. The vehicle rides on 20-inch OZ Racing alloy wheels and is available in one of three colours; Frozen White, Sea Grey or Agate Black.

Inside, the Ranger MS-RT cabin boasts premium leather trim with contrasting orange stitching. There are MS-RT branded floor mats and scuff plates too. If you don’t want a double-cab version, the MS-RT treatment is available for the Supercab model too. All the Ford Ranger Wildtrak’s convenience features are retained, such as the SYNC3 infotainment system, heated seats, and rearview camera.

Under the bonnet, the 2.0litre bi-turbo diesel motor is retained in factory tune. It develops 157 kW and 500 Nm, and there’s a 10-speed automatic gearbox.

The Ford Ranger MS-RT is earmarked for selected European markets, meaning it’s unlikely to make its way to South Africa. Locally, if you’re wanting to inject some goodness into your Ranger, your options are limited. We reported back in 2018 Roush was offering some performance gains, with some further updates available in 2020.