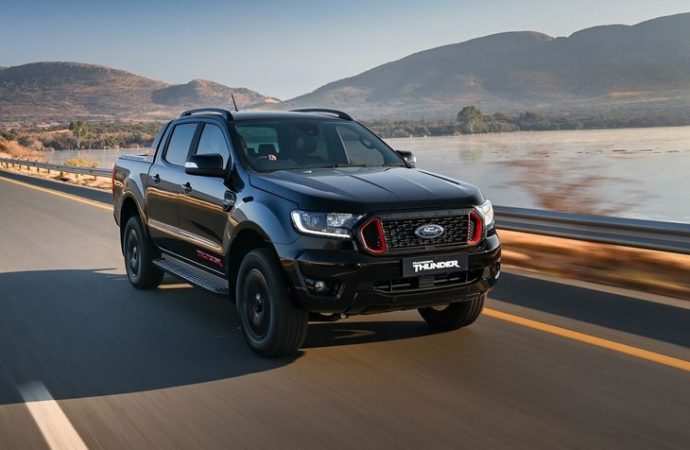 A more exclusive Ford Ranger Wildtrak has been announced.

Ford has revealed yet another special edition Ranger. The “Thunder” trim debuted on the T6 bakkie in European recently and it’s now available for the South African market.

Based on the existing Wildtrak, this new Thunder package features updated styling details, but no significant mechanical changes. The Ranger Thunder is finished in a Sea Grey colour and uses red styling details to mark its individuality. There’s also Frozen White, Absolute Black and Moondust Silver available.  Most notable is the three-dimensional front grille and the Thunder badging.

That reshaped grille and non-functional sportsbar in the back, both feature red detailing, whilst customers have a choice of loadbox accessories, including a roller cover or large utility stowage box. Front and rear lights receive darkened bezels and a ‘Thunder’ graphic, in red, takes pride of place on the lower portion of both front doors.

Darkened 18-inch alloy wheels roll in the Thunder’s wheel arches and there are skid plates, to protect it in technical off-road terrain. Inside the Ranger Thunder, there is branded seat embroidery and red contrast stitching. An open door also reveals sill plates with red illumination and black floor mats. The Ford Ranger Thunder also benefits from numerous practical additions in the load compartment too like a black roller shutter.

The Ranger Thunder is powered by either Ford’s 2.0-litre bi-turbo diesel engine, which delivers 157 kW and 500 Nm via a 10-speed automatic transmission, or the older 3.2 5-cylinder TDI motor. This special edition double-cab could be a sign of things to come as Ford tries to extend the T6 bakkie’s life before the 2022 all-new Ranger takes its place.

A Ford Ranger for Rangers