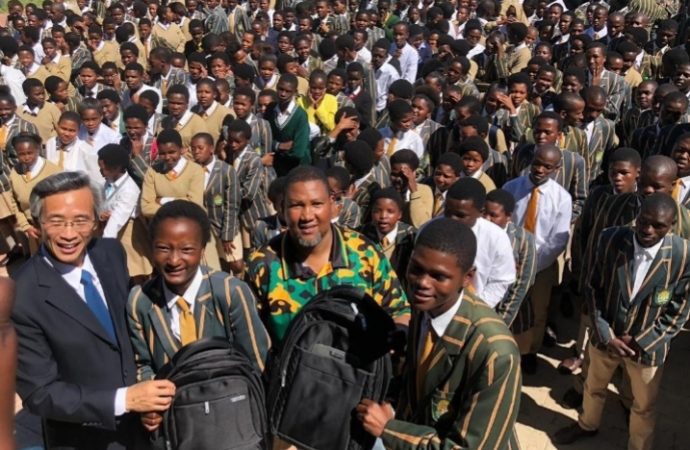 The Chinese delegation was led by Ambassador Lin Songtian, and accompanied by local Chinese businessmen from the Eastern Cape.

Ambassador Lin has donated 44 computers. Of these, 22 computers will be used for purposes of service delivery work by Mvezo Traditional Council to its community and to promote accessibility and computer literacy as an important stepping stone in the community’s development.

Ambassador Lin handed 10 computers to the Makgatho Lewanika Mandela Primary school for its library usage. He also handed 12 computers to Mandela School of Science and Technology.

Ambassador Lin handed school bags with stationery sets to learners who will all benefit from the back-to-school campaign initiative where learners received the essential school material.

Chief Mandla Mandela said, “This ANC government regards rural development as a key area to unlock South Africa’s economic growth. This development potential can only be realized through the recognition of education as a priority and critical for overcoming the rural urban development divide”.

Mvezo, which gave birth to President Mandela, is now also positioning itself as an innovative model for rural education and a fulfillment of Madiba’s belief that “education is the best weapon we can use to change the world.”

Ambassador Lin not only committed his government’s commitment to work closely with the Royal House of Mandela and Mvezo Traditional Council but also to help grow the commercial potential of Mvezo village in exporting some of the locally produced items like aloe and meat products.

Mvezo has many hectares of Aloe growing naturally and specialist soil studies will be done to assess what other crops are suitable for cultivation in the area as this can be an important area to leverage the economic potential, alleviate poverty, create jobs and provide much needed food security.

Our relationship will further help expose the potential of our rural economy to international markets such as agriculture, education as well as e-commerce.