“Home at last!” – former factory workers as they get ownership of homes they rented since ’72 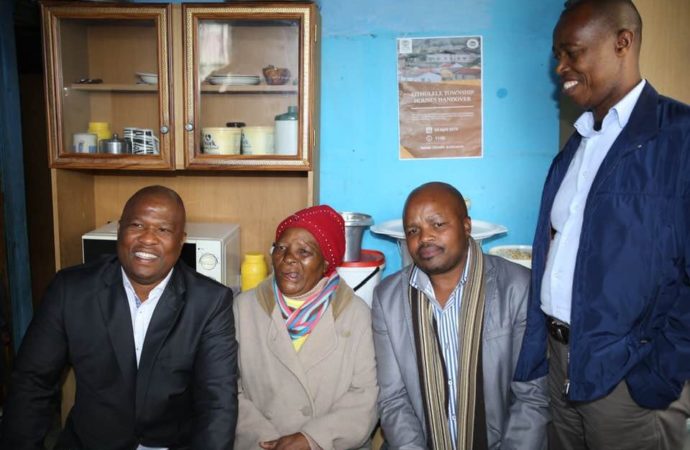 The dignity of the people of Zithulele Township in Butterworth was restored on Wednesday when they took ownership of houses they have rented from as early as 1973.

Finance MEC Oscar Mabuyane handed over the houses to 105 factory workers who rented the homes from the ECDC. Miriam Mtebele was a domestic worker for the ECDC from 1973 when she occupied the home. The new homeowners described the new experience as a dream come true. Mtebele said she brought up her seven children at the property. “I thank government for making this dream come true,” Mtebele said.

Another new homeowner, NoAnswer Tomi, said she extended the two roomed house into a five bedroom home with the help of her late husband who worked in one of the factories. They moved into the house in 1972. She said people who lost their jobs were removed from the houses but were allowed to rent when reappointed permanently. “My husband, who died in 2015, would be very excited to be owning this house today. When we moved into this home we had no children but now we have five children and 14 grandchildren,” she said.

Mabuyane said handing over the homes was part of the ANC led government’s programme of providing decent shelter to those who can’t afford to buy their own homes. Mabuyane said government decided to give the homes to indigent people as part of providing human settlements. “We decided not to sell these houses but to give them to these workers who need them and who have called them homes for decades. We will do this in all the places where government owns properties through the ECDC,” he said.

The ECDC has 250 stand alone houses and 33 commercial blocks of flats in Mthatha, Komani and Butterworth. These are being disposed of as part of unbundling “non core assets”.