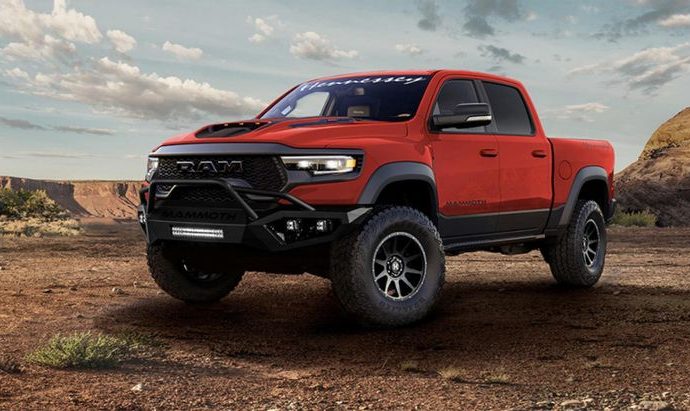 With more power and performance than most supercars, surely the Hennessey Mammoth 1000 is the world’s fastest bakkie?

Hennessey decided that wasn’t enough, and the Texas-based tuner set out to build an extreme package. The image you see here is just a rendering for now from Hennessey, but the Mammoth 1000 should resemble this. Featuring a raised ride height and new 20-inch Hennessey wheels as well as an LED lightbar, the Mammoth 1000 gains what Hennessey dubs its Off-Road Stage 1 package. Does this mean there could be an even more ballistic option in the future? Only time will tell.

Aside from the visual upgrades, Hennessey has worked extensively on the Hellcat 6.2-litre supercharged motor and it now produces 755 kW and 1 314 Nm. An upgraded supercharger, new pulleys, new headers, new exhaust and an uprated ECU to tie it all together are just some of the upgrades. Performance-wise, Hennessey reckons 3.2 seconds to 100 kph is possible. “The RAM 1500 TRX is exciting in stock configuration, but I’m seeking extraordinary,” said CEO John Hennessey. “The Mammoth 1000 upgrades completely transform this impressive pickup into something astonishingly powerful, visually exciting, and indisputably unique.”

Hennessey says it will be building just 200 units in 2021. Brace yourself for countless YouTube drag race videos showing the Hennessey Mammoth 1000 eating supercars.