Lamborghini has whipped the roof off its 602-kW Sian hybrid hypercar, which is powered by a free-breathing – but supercapacitor-assisted – 6.5-litre V12 engine. Only 19 units of the Roadster, the St’Agata-based firm’s most powerful open-topped machine to date, will be built.

In local Bolognese dialect, Sian means “flash” or “lightning” and the newcomer is being billed as a harbinger of “Lamborghini’s route to future hybridisation”. By itself, the V12 motor, which incorporates titanium intake valves, produces 577 kW at 8 500 rpm, but the firm has combined it with a 48V e-motor and a supercapacitor located in the bulkhead. 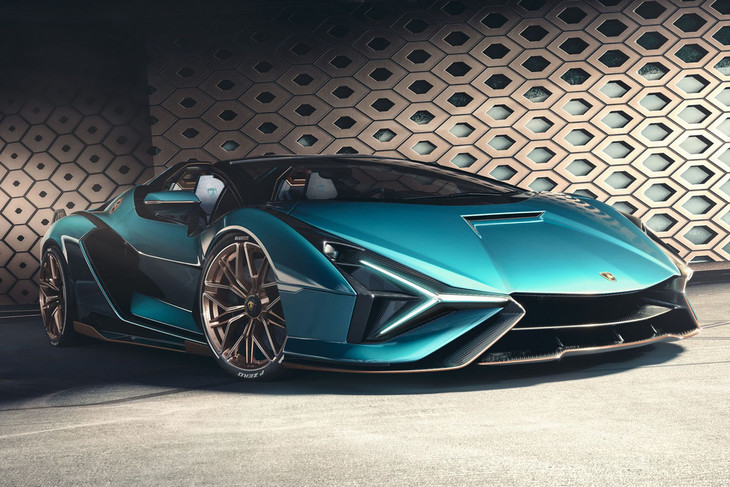 The supercapacitor is said to store 10 times the power of a lithium-ion battery and is 3 times lighter than a battery producing the same output. It allows the e-motor, which is incorporated into the Sian Roadster’s transmission, to deliver an instantaneous extra 25 kW (for a total output of 602 kW) and supports low-speed parking manoeuvers.

The electric system weighs only 34 kg and its symmetric power flow ensures the same efficiency in both charging and discharging cycles. As a result, the regenerative braking system fully charges the energy storage system every time the vehicle brakes. Not only does the system facilitate instant acceleration in low gears ­– traction force is improved by up to 10% in 3rd gear, for example – it allows the Sian Roadster to travel at up to 130 kph for 10 km on pure-electric power alone. 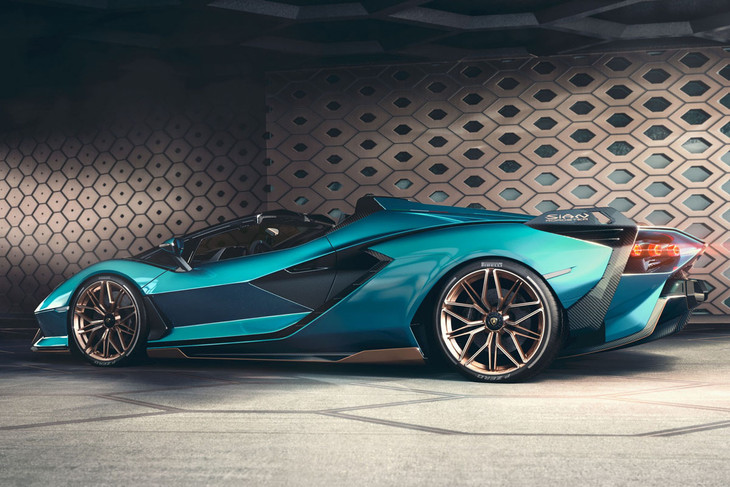 Hexagonal shapes abound in the Lamborghini’s sheet metal; note the swathes of carbon-fibre in the vaned rear section.

For the record, Lamborghini’s newcomer is claimed to accelerate from 0 to 100 kph in less than 2.9 seconds, while its top speed is said to be in excess of 350 kph.

This Sian Roadster has a Uranus Blue paint finish contrasted with eye-catching Electrum Orange wheels, while its interior is trimmed in white leather with Glauco Blue detailing and Electrum Orange aluminium elements. The newly-designed air vents are notable because they’re produced via 3D printing and can be customised with a buyer’s initials.

The new Lamborghini’s front end is distinguished by an integrated carbon-fibre splitter and the brand’s characteristic Y-shape headlights, while the aerial view evokes the iconic periscopio line inspired by the first Countach, which runs diagonally from the cockpit to the rear and culminates in the air-streamers behind driver and passenger. The rear aspect is dominated by a sextet of protruding hexagonal taillights (also inspired by the Countach) as well as a V-shaped retractable spoiler. 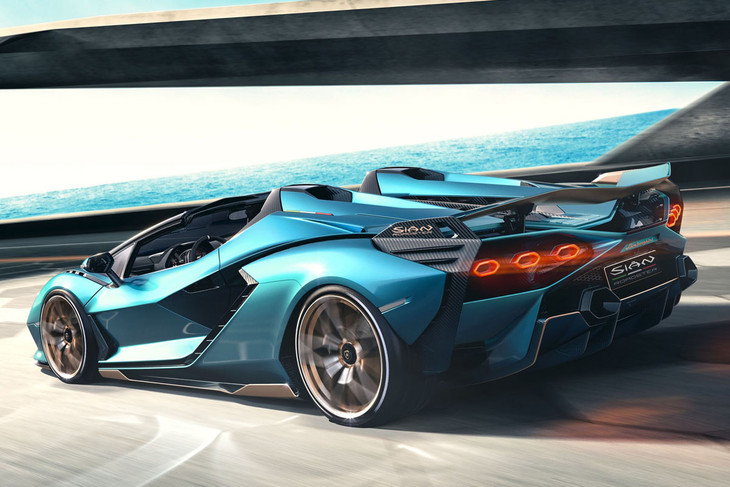 The V-shaped rear spoiler extends elegantly from the rear deck and bears the stylised Sian detailing as shown in the interior.

From an aerodynamic point of view, airflow is directed through the front splitters, bonnet and side air intakes/outlets and over the rear spoiler, “with no loss of aerodynamic efficiency from the roadster’s roofless design”, Lamborghini says. The operation of the active cooling vanes on the rear is triggered by the reaction of smart-material elements to the temperature generated by the exhaust system, causing them to rotate and providing an elegant, lightweight cooling solution.

Furthermore, the St’Agata-based firm says the Sián Roadster also offers a heightened level of driving comfort (compared with other hypercars) by virtue of its hybrid system: “The momentary sensation of deceleration “and missing torque” felt during gear changes powered by a traditional combustion engine is eliminated by the torque-upshift fill provided by the hybrid’s e-motor,” the company says.

The only downside (apart from the fact that all Sian Roadsters have already been pre-sold) is that the newcomer is a hardcore roadster; it has no retractable roof section!

Search for a used Lamborghini on Cars.co.za