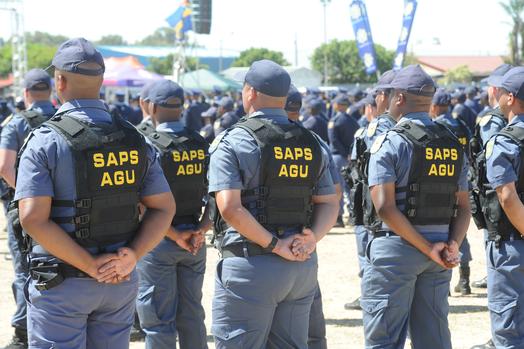 The Anti-Gang Unit (AGU) is on a mission to raid several suspected drug houses in Mitchells Plain to counter a surge in gang violence. On Friday night, neighbourhood watch members joined in.

At a house in Korfbal Street, Beacon Valley, a woman was arrested with four young men. Police found wads of cash in the bedroom which the woman claimed was money raised from takkies she sells with her daughter. The police count R17500 found on the woman, in her purse and a pillowcase.

The well-groomed woman confirmed her dead husband was a member of the notorious Mongrels gang, but said he wanted to quit.

She was told the money, now bagged and tagged, would be handed into police custody and an enquiry opened. “There’s no indication of what you’re doing here. Saps will open an enquiry. Until you can prove that the money was obtained in a legal fashion” an officer explains.

Minutes later, the officer wants to know who owns a broken-down motorbike on the property. A check shows it has been stolen, even though people in the house say it belongs to the woman’s husband. It is 9pm, and the bilal (call to prayer) sounds from the mosque across the road.

Everyone in the house is arrested.

There is commotion as (presumably) family members arrive as the woman is led away.

She shouts to someone: “Dis vir Joa se bike,” and to a teenager, thought to be a granddaughter, she says “Bel vir Deema”.

The house looks like a fort and cameras capture the comings and goings where children earlier ran towards the police action before they where chased away. Before the unit leaves the house, there is a call about a gang shooting in Kensington and members of the Tactical Response Unit are dispatched.

The convoy of police vehicles leaves for another house in Beacon Valley. It looks like a warehouse. Suspicions are that the house belongs to known gang boss Ralph Stanfield, although a young man tells the cops: “It is Elton’s house.”

He says he is the “caretaker”. The other man in the house says he is a “28”, referring to the numbers gang.

“This is Ralph Stanfield’s house. The guy that lived here moved to Delft because he was almost assassinated outside,” says the female captain who leads the questioning of suspects.

Police find R3500 in cash. The double-storey has no furniture and a black bakkie is parked in a garage. A police check shows it is registered to a Jones in Joburg.

Arrangements are made to take the suspects to the police station while the operation continues .

At another house, a teenager tells police no is home. Inside, a middle-aged man is found eating roti and curry with a couple who he says are visiting him.

The frail man tells a cop he has recently been discharged from hospital and has a bullet lodged in his left shoulder. Two pictures of Nelson Mandela adorn the walls in the sparsely furnished room . The house is searched but nothing is found.

Later, the unit meets up with neighbourhood watch volunteers who have been on a walkabout from Portland to Tafelsig. Earlier in the week, officers were stoned when they arrested a man following the rape of an eight-year-old girl.

Mitchells Plain station commander Brigadier Cass Goolam raised concern about an increase in gang violence in the area. “That is why we are getting support from the Anti-Gang Unit, because with current capacity it was getting a bit overwhelming.”

Goolam returned to his job in Mitchells Plain more than a week ago. He was suspended in September 2017 after firearms went missing at the station. He has been found not guilty and the suspension lifted.

Mitchell’s Plain Community Policing Forum chairperson Abie Isaacs welcomed the operation with the Anti-Gang Unit and the return of Goolam.

“Since September 2017, we have been saying our station commander is innocent. You are busy with a witch-hunt,” he said. The AGU was launched last November and is headed by Major-General André Lincoln.