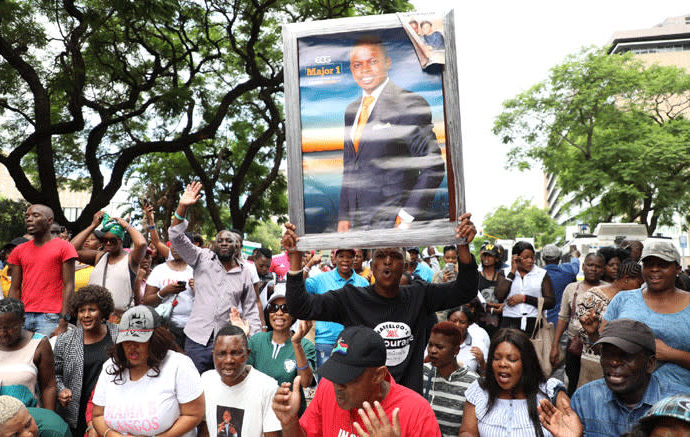 BLF leader Andile Mngxitama believes that charges of fraud and money laundering are cooked up to bring a fall of Pastor Shepherd Bushiri.

Supporters of Prophet Shepherd Bushiri protest outside the Specialised Commercial Crimes Court in Pretoria. Bushiri and his wife Mary appeared in court for charges of fraud, money laundering and contravening the Prevention of Organised Crimes Act. Picture: Abigail Javier/EWN.

Mngxitama was amongst hundreds of Bushiri’s supporters gathered outside the Pretoria Specialised Commercial Crimes Court on Monday, calling for the church leader and his wife to be released from custody.

Members belonging to the Enlightened Christian Gathering (ECG) church have threatened to boycott the elections if he is not set free.

WATCH: Bushiri supporters: ‘Is the SA govt bigger than god?’

Bushiri and his wife Mary were arrested on Friday in Rustenburg and charged with fraud, money laundering and contravening the Prevention of the Organised Crimes Act.

Mngxitama criticised other political parties for failing to show support to Bushiri.

He says when politicians want votes before elections they go to him for prayers.

“The sad part is that many of these leaders of political parties when they want blessings, they come to the Major One. But today, because he is in trouble, they all ran away. We are the only ones who’ve come out because we are on the side of the truth.”

The BLF leader says Bushiri is unfairly targeted because he is a successful young black man.

Mngxitama believes that charges of fraud and money laundering are cooked up to bring a fall of the church leader.

Bushiri and his wife are due back in the dock on Wednesday.