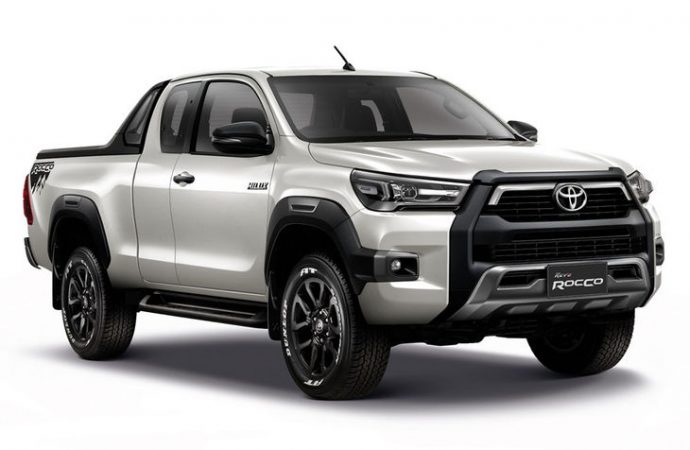 Okay, the updated Toyota Hilux range is coming to South Africa, but just how fast is the flagship derivative powered by the beefed-up 2.8-litre turbodiesel motor? And, what will the single- and Xtra-cab derivatives look like in more affordable specifications?

Toyota unveiled its updated bakkie’s new look last week and although the newcomer is expected to go on sale in overseas markets in a couple of months’ time, the South African market will have to wait a little longer, because Toyota SA, which produces the Hilux (and its Fortuner sibling) at its Prospecton plant, has a different product cycle. 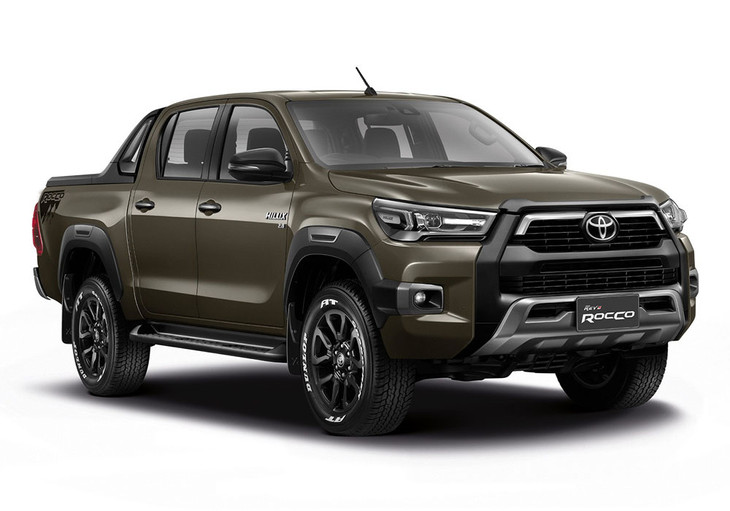 Is this what future Raider versions will look like? Note the squared fog lamp housings and silver-grey bumper and wheel-arch inserts.

When reports of the new-look Hilux began to surface, Toyota SA told us: “We will be getting those models, but not immediately. Our timing is quite different to Australia’s; they don’t source their vehicles from South Africa. Unique-to-SA derivatives such as the Legend 50 and Dakar bridge the gap and extend the life of our current Hilux offerings.” When we pushed for a date, it was suggested that whereas Australia was likely to receive this facelifted Hilux in August, South Africa’s units would follow “months” later.

From a mechanical point of view, the biggest development is the upgrade of the range-topping 2.8-litre 4-cylinder (GD-6) turbodiesel engine through the introduction of “multiple new components” as well as “enhanced cooling” measures. As a result, the motor, which produces 130 kW and 420 Nm (manual) or 450 Nm(automatic) in current guise, will deliver a maximum power output of 150 kW, but while the 3-pedal version’s peak torque remains unchanged, the self-shifter will churn out a peak torque figure of 500 Nm. 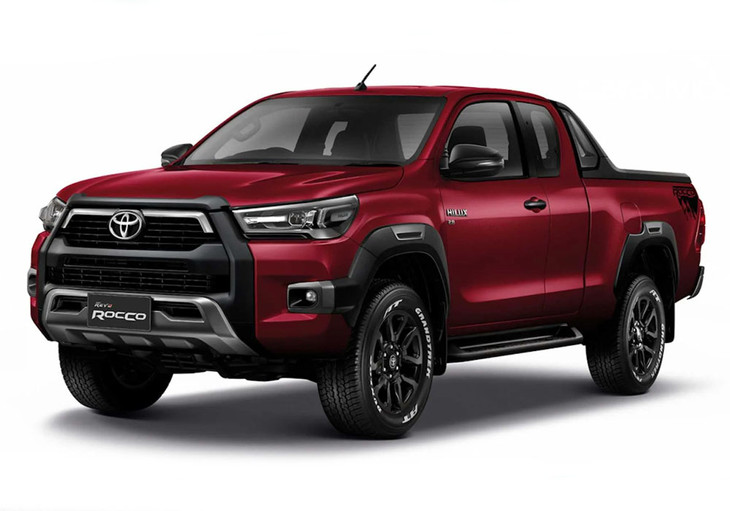 In Xtra-cab configuration, the top-spec Hilux will look like this in the Thai market. It’s a very handsome design.

And, while Toyota suggests that the GD-6 engine’s claimed combined fuel consumption has been improved “by up to 11%” and that “accelerator response” has been tuned to “deliver greater driver control”, it’s interesting to note that the top-of-range Hilux engine’s peak outputs (150 kW and 500 Nm, when mated with an auto ‘box, remember?) are now near-identical to that of the Ford Ranger’s flagship 2.0-litre bi-turbo 4-cylinder diesel motor, which is also exclusively mated with a (10-speed) auto ‘box: 157 kW/500 Nm.

‘Faster than a Ranger Raptor’

While it’s been considered a trifle vulgar to claim 0-to-100 kph times for bakkies in the past, Ford stated in 2018 that its 157 kW/500 Nm Ranger Raptor flagship derivative was capable of dispatching the benchmark sprint in 10.5 seconds. Then, when Toyota revealed details of its a range-topping Invincible X derivative of the updated Hilux, which will introduce the upgraded 2.8-litre turbodiesel unit in the European market, the Japanese firm claimed that the 150 kW/500 Nm newcomer could accelerate from 0-100 kph in 10 seconds flat. Because the Raptor is 143 kg heavier than its Wildtrak sibling, we assume the latter will be a little quicker than 10.5 sec to 100 kph, but still, the gloves are off! 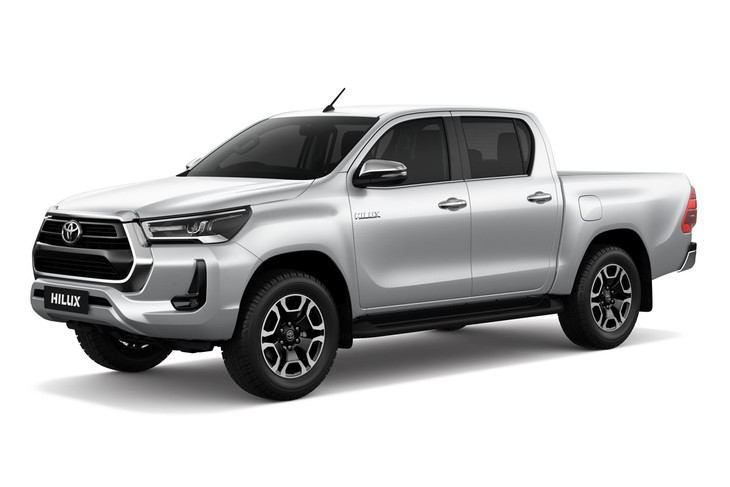 As to what the South African-specification new-look bakkies will look like, well, we can only speculate. The highest-spec versions we’ve seen are the European-spec Invincible X and Thailand’s Hilux Revo Rocco (shown above). They all feature smaller, slimmer headlamp clusters with LED elements and the large trapezoidal grille with a black surround and thicker crossbars, but additionally silver-grey accents in the forms of a grille garnish bar, skid plate, square foglamp housings as well as vent-like wheel-arch inserts.

By contrast, the first examples of the new-look Hilux that were shown featured contrasting silver-grey (or chrome-look) grille surrounds and L-shaped black bumper accents/foglamp housings, but matching revised tail-lamp clusters (with a more distinctive lighting signature).

Judging by the current derivative hierarchy in the South African market, the next-gen Raider (when Legend 50 is replaced) might closely resemble the high-spec European and Thai versions of the new-look Hilux, while the mid-spec would be more akin to the existing SRX spec we know well…

Whatever turns out to be the case, the South African-spec Hilux won’t look identical to either of those examples; it might even be a mix of the two. As for the workhorse specification of South Africa’s top-selling bakkie, it’s likely to feature black-on-black grille treatments and (predictably) little in the way of aesthetic garnishes (shown below). 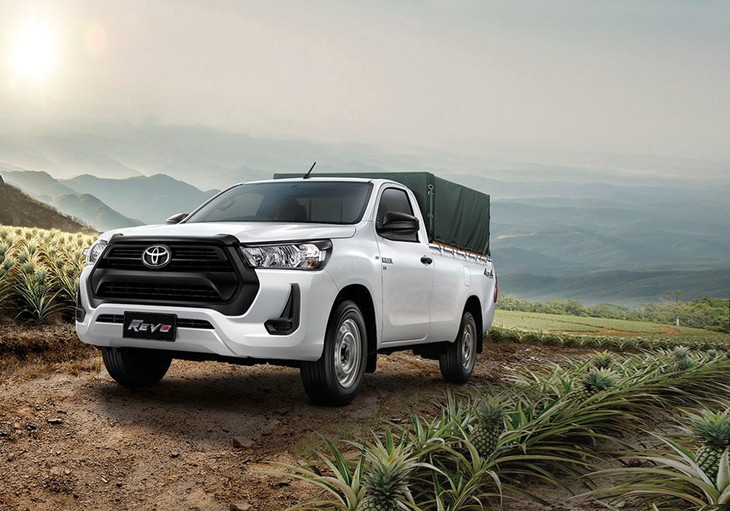 The workhorse (or base) specification for the Thailand market.

Meanwhile, the Hilux’s suspension has been revised through the implementation of tweaked shock-absorber tuning, new bushings and an improved leaf-spring design, which is said to improve ride comfort on rough roads when carrying low loads. There have also been revisions to some derivatives’ towing capacities (to be confirmed at a later date).

And, finally, a few details of the leisure double cab’s interior specification; inside, the higher-spec Hilux will feature an updated instrument cluster with a 4.2-inch multi-info display between the speedometer and rev counter (it apparently incorporates a digital speed readout) as well as an 8-inch touchscreen infotainment system with enhanced voice recognition functionality, as well as Apple CarPlay and Android Auto compatibility. We assume a reverse-view camera and satellite navigation will feature too. 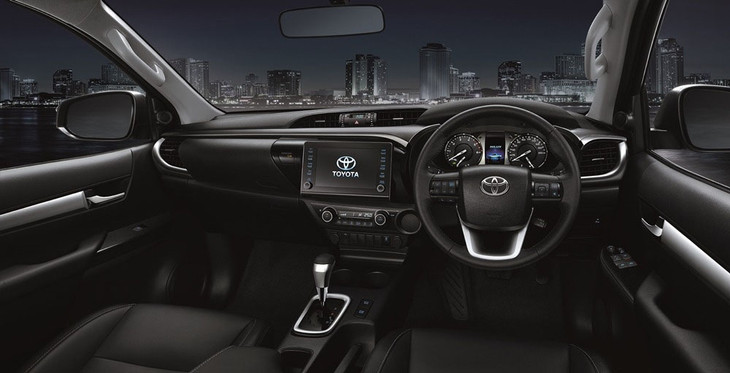 Toyota Hilux by Wald is a Boss