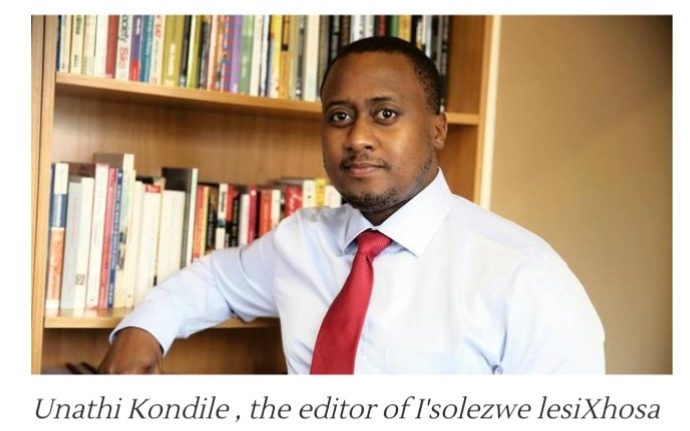 I had just woken up from a luxurious slumber at Zimbali Resort in Ballito. There I was lathering my hands with its sensual shower gel when a certain bishop rang me up.

“I beg your pardon?” I finally said. Followed by a “Hello? Let’s start with greetings and who you are, no?”

“I am Bishop ***** (not named out of respect) from Mthatha. Now listen here, you servant of God, I have a copy of your paper in my hand.”

Oh, yes, that day was Thursday. The day our Xhosa newspaper, I’solezwe lesi Xhosa, comes out.

That particular Thursday, in 2016, the front page story was about a man who was made to walk around naked by his employers in East London. We quoted the employee saying, “They made me walk around with my penis exposed” in Xhosa.

And the dear bishop was beside himself with rage. Only his position in the church withheld the expletives he could have potentially released on that phone call.

Some prefer a penis being referred to as ilungu lobudoda (literal translation: male member or part).

Now, I understand this penis avoidance might be present in other language groups as well, but let’s stick with the Xhosa version today.

I ended the call by saying I would not take part in the destruction of the Xhosa language by diluting the language’s original terms. A penis, therefore, stays a penis, even in Xhosa.

This week, this memory came hurtling back to me as we put out a poster about a male Dutywa village teacher who sent a video of his penis to a learner, who in turn circulated it to other learners via WhatsApp. Since then, the penis has gone viral. Accompanying the video was the question: “Do you like it?”

Naturally, we wrote the story and headlined it with: “MAN CIRCULATES VIDEO OF HIS PENIS.”

Now, in Xhosa this is: “UTITSHALA USASAZE UMTHONDO NGEVIDIYO”, attracting 401 shares, 350+ comments and 101 658 reactions on Facebook. Many commended us for using the actual term for a penis. Others were embarrassed to see the word in print.

Unfortunately, the bishop could not call me this year. He was sadly shot dead in August last year. You cannot make this stuff up.

But oooh, have the sanctimonious social media outrage-at-the-fingertips crowd lapped it up.

“You cannot use the word ‘penis’; how are we supposed to explain this word to our children?”

Well, if your child is old enough to read but unable to identify private parts nor name them, prepare yourself for a secretive child – one of those kids who just rocks up pregnant one day, miraculously. All sorts of fairy stuff lies ahead with such upbringings.

Anyway, on a much more serious note: there is something deeply troubling about the psyche of black people and their languages. It is as if they were actively taught to hate them.

Which is partly true. Especially when it comes to direct terms and being direct. We call this ukuhlonipha (respecting). Now every culture has a level of respecting within it but when that respect leads to destroying a language and self-censoring, one must begin to worry.

This self-censorship and hate is something that was brought to us by missionaries and embedded into our heads from the early 1800s when we were being taught to write the vernacular languages in Roman script.

Suddenly, certain words could not be written or they were too vulgar. Yes, when the missionaries made final edits they would remove some words and also define others as derogatory. Based on what, when the native speaker has given you the actual word?

For example, let me break down this penis word in Xhosa. Umthondo means penis, the stem of this word is thondo which refers to anything that is erect or even point out lineage – as in this child is that chief’s child / ngumthondo wenkosi lo mntwana (p311, The Greater Xhosa Dictionary, HW Pahl).

We even refer to children as umntwana womthondo (paternally proven child). So when you kill this word and start saying “No, you cannot use it”, you are also killing an entire wealth of expression and ways in which it can be used. Put simply, you are killing indigenous knowledge systems. It is therefore important for a vernacular paper to ensure that such words are used.

Where ukuhlonipha (respecting) gets muddied, particularly for black South Africans, is when you add Christianity and civilisation.

We call those who have embraced such (fully), among our own, amagqobhoka (those who have a hole, who have been penetrated by other cultures).

Those who did not embrace any of the wishy-washy erosion of their own cultures and dilution of languages were referred to as amaqaba (the ones who still smear red clay on their faces / the backward ones). Amaqaba is now used to refer to the uneducated.

I, personally, would rather be called iqaba (singular of amaqaba) then start diluting Xhosa and destroying our language because of amagqobhoka who loathe themselves. That will not happen. They must go to libraries and find themselves there.

This is International Year of Indigenous Languages and we should be very wary of those among us who try to censor our languages, those who try to lull us and make us use infantile terms when we have actual words for things.

An inability to use your own language fully as well as speak directly could potentially signify a low self-esteem coupled with zero confidence.

When other races look down on us, let us understand that we also look down on ourselves by letting go of our languages that define and strengthen us.

That said, a penis is a penis in whichever language.