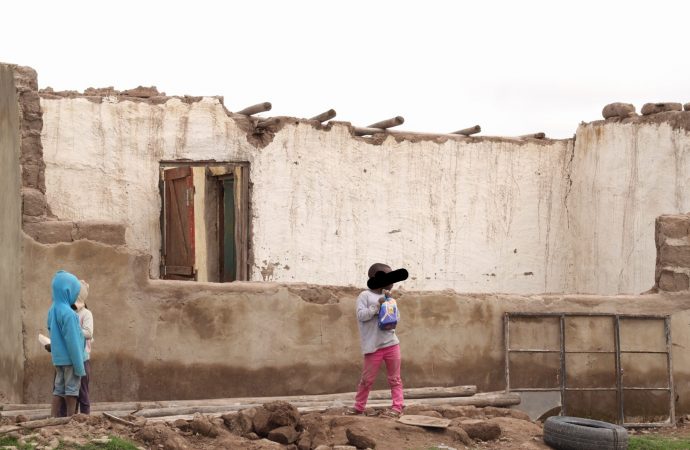 Despite the sombre mood amongst many of the beneficiaries, some of whom are staying with neighbours, they expressed deep gratitude to the National Lotteries Commission (NLC) for what one beneficiary called “the most decent food parcel we have ever seen”.

Siyolise Matshaka, mother of 3 young children, whose home was completely demolished when the OR Tambo District was hit by a devastating tornado, stays with neighbours. “Being given a place to stay by a neighbour and still rely on them for food has been the most painful part of this disaster. Now that Lotto has given us such a decent food parcel I can go to my neighbours and share with them as they have been sharing with my family for the past few weeks. This somewhat gives me more dignity”, said Matshaka.

My children and I were miraculously saved by a wardrobe from the falling walls of the house. I still praise God that we came out alive”, added Matshaka.

Hotnews aasked her how she was planning to rebuild the house. “It was a struggle to build it in the first place. I have no means to rebuilt it but I’m hoping that government will assist after officials came to inspect and take our details”, replied Matshaka with teary eyes.

NLC’s Eastern Cape Provincial Manager, Mzikayise Mani, expressed great satisfaction on how the first day of the three-day distribution programme went. “Meeting the beneficiaries for the first time and observing their sense of gratitude is the most humbling experience of this exercise. As the NLC we are happy that we chose to intervene. The impact of this intervention is evident on the faces of the beneficiaries”, said Mani who had been driving from distribution point to distribution point personally monitoring the project, helping to load and handover food hampers.

One of the distribution centres was the Amampondo King’s Palace in Nyandeni where 62 beneficiaries came to collect their hampers. Speaking on behalf of King Ndlovuyezwe Ndamase, Nkosi Dalukulunga said the King was grateful that his subjects would be able to have groceries for Christmas even as they grappled with the pain of losing their homes.

The NLC’s implementing agent, Ubuntu Transformation Foundation (UTF), brought in dozens of employees and volunteers who worked mainly at the two central distribution centres for the first day, one in Libode and the other in Tsolo.

Chairman of UTF, Ace Ncobo, said that the operation was a logistical challenge. “We do a lot of work in this space and we know that even a small number of food hampers presents a huge challenge logistically because the beneficiaries are never from the same places. The distribution of 3500 hampers is a huge logistical nightmare but we are humbled by the passion displayed by our mployees, volunteers and government officials. The stars of the show are workers from the affected municipalities and employees of the Department of Social Development. They have been outstanding!”

“When we approached Acting MEC for Social Development, Hon Nomakhosazana Meth, to assist with this project, we had no idea that her department would deploy such valuable resources in the form of both personnel and vehicles. Without her department’s assistance we would never be able to pull this massive operation over just 3 days”, added Ncobo.

The distribution continues on Friday at Port St Johns and Lusikisiki.