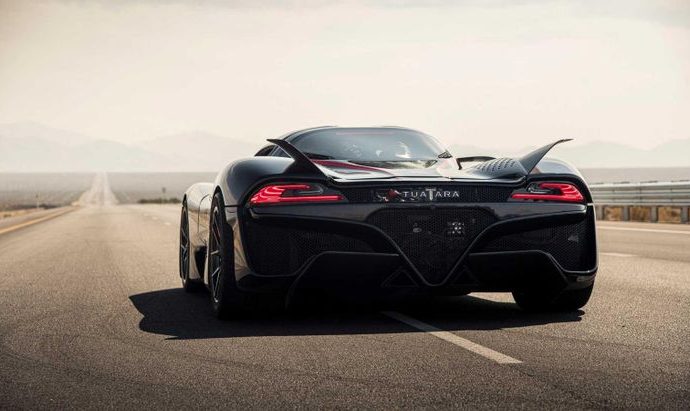 It’s official, the SSC Tuatara has claimed the title as the fastest production car in the world.

Back in 2007, the SSC Ultimate Aero became the fastest production car in the world with an average top speed of 412.22. Now, 13 years later, SSC is once again writing itself into the history books.

On a very long stretch of road outside Las Vegas, State Route 160 to be exact, the American-built SSC Tuatara, with racing driver Oliver Webb at the helm, smashed an average speed of 508.73 kph after completing 2 runs in opposite directions to become the world’s fastest street-legal production car. On the first run, Webb achieved a speed of 484.53 kph while the second run was faster at 532.93 kph.

Impressively, Webb commented that the SCC Tuatara was “still pulling well” and “wasn’t running out of steam yet” implying that it could have gone even faster! The run was completed using road tyres and normal fuel. More than this, the Tuatara also smashed records for the flying mile and flying kilometre on a public road with speeds of 503.92 kph and 517.16 kph respectively.

The Tuatara is powered by a twin-turbocharged 5.9-litre flat-plane crank V8 that produces 1 007 kW on standard 91 octane petrol but can produce 1 305 kW when guzzling E85 race fuel with 1 735 Nm of torque. Those numbers are directed to the rear wheels using a 7-speed dual-clutch transmission.

Few cars are capable of achieving such high velocities but the only potential challengers to vie for the title are the Koenigsegg Jesko and Hennessy’s Venom F5. Note that Bugatti is no longer interested in achieving world speed records.

Only 100 units of the SSC Tuatara will be produced with a starting price of $1 625 000 or roughly R26 891 377 at current exchange rates and customers are already taking delivery of this super-fast hypercar.

Watch footage of the SSC Tuatara below!