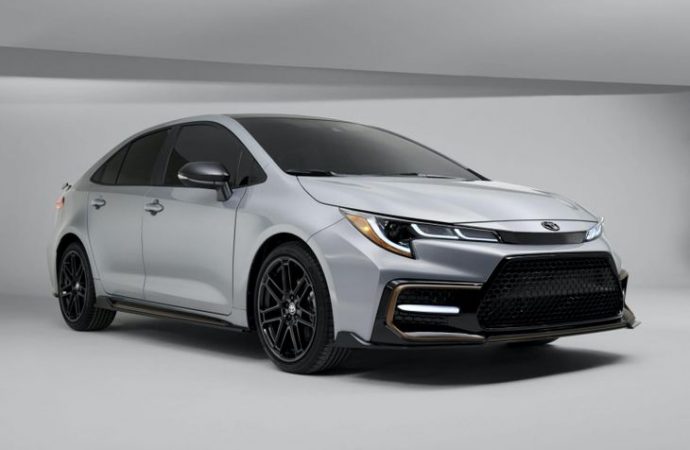 The Corolla sedan is not typically associated with sportiness or dynamic driving ability but Toyota is producing a Corolla Apex Edition that will have you thinking otherwise.

The 12th-generation arrived in South Africa earlier this year and while such sedans are no longer as popular as they used to be due to the rise in popularity of SUVs and crossovers, the Corolla, however, has managed to corner much of the market.

While the new Corolla, which is built on Toyota’s New Global Architecture (TNGA) platform offers enhanced driving dynamics and improved ride comfort over its predecessor, to describe it as overtly sporty might be a push too far.

However, that doesn’t mean that the Corolla can’t be sporty or more performance-orientated.

The latest Corolla Apex Edition you see here is proof of that.

It’s due for the U.S. market and only 6 000 units will be produced. The Corolla Apex Edition makes use of the Corolla’s 2.0-litre Dynamic Force engine with 125 kW and 200 Nm of torque and will mostly be offered with a CVT while only 120 units will be available with a 6-speed manual transmission. The treatment is only offered on SE and XSE trim grades with 3 colour choices to choose from.

The Corolla Apex Edition gains a black body kit with bronze elements while a front spoiler, rear diffuser and flared side skirts give it some striking visual presence. There’s also an optional spoiler for boot lid which elevates the look even further. The Corolla Apex Edition rides on 18-inch cast aluminium wheels which reduce overall weight by 4 kg. A sport-tuned exhaust system with a 3.5-inch stainless steel tip is also fitted.

Other upgrades include a sports suspension with coil springs that lower the car by 15 mm and improve cornering ability by reducing roll angle. Along with tuned shock absorbers rebound springs, solid stabiliser bars, jounce bumpers, roll stiffness has increased by as much as 47% at the front and 33% at the rear. Furthermore, Toyota has recalibrated the electronic power steering system to offer a sportier driving feel to match.

While this might be enticing for fans of the Corolla, we can’t help but wonder if this special edition Corolla is a way for Toyota to test the appetite for a sportier Corolla. Perhaps it’s a preamble to something more exciting, like a fully-fledged Toyota Corolla GRMN model? Time will tell…

Buy a new or used Toyota Corolla on Cars.co.za

Watch our video review of the new Toyota Corolla below!