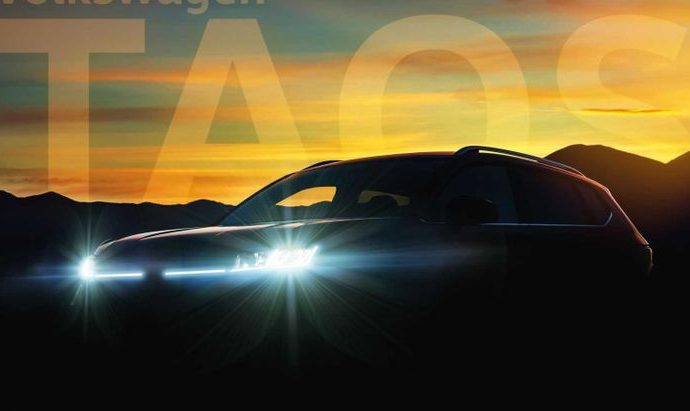 The Volkswagen SUV offensive continues with the Wolfsburg-based manufacturer teasing yet another offering.

Update: Volkswagen has confirmed the name of its new SUV. The Taos will be a sub-Tiguan crossover. “We’re thrilled to announce the name for the newest member of the Volkswagen family,” said Hein Schafer, Senior Vice President for Product Marketing and Strategy at Volkswagen of America. “It was important to choose a name that really embodied the nature of the car and the town of Taos, New Mexico was a perfect fit. It’s a small city that offers big things—from outdoor adventure to arts and design and great cuisine.”

With a reveal date set for the second week in October, this new compact Volkswagen is said to be classed as compact-sized and is smaller than the Tiguan.

Volkswagen has confirmed this model will be launched in the United States. “We’re excited to share the first glimpse of the newest member of the Volkswagen family,” said Scott Keogh, president and CEO of Volkswagen Group of America. “Great things come in small packages, as Volkswagen has proven throughout the years with its iconic Beetle, Golf and Jetta. This next car will be no exception.”

The German brand already has quite a portfolio of vehicles in the SUV category. Our market alone receives the T-Cross, Tiguan, Tiguan Allspace, Touareg, with the T-Roc joining the lineup towards the end of 2020. Overseas, there’s the Volkswagen Nivus and numerous China-only models like the Tayron and Tiguan X. Let’s not forget that these models are also offered with performance engines and badged as R, while there’s even a convertible model for the T-Roc. Volkswagen is trying its hardest to cover all the bases with its SUV family.

Judging from this teaser image and video, we’re guessing this is an all-new model as no vehicle in the current lineup features daytime running lights in this layout. As always and is customary with Volkswagen SUVs, expect a variety of powertrains, but given the brand’s history with diesel, it’s unlikely the oil-burner will be offered Stateside.

We’ll keep an eye on this one and will update as soon as we hear more.

Living with the Volkswagen T-Cross