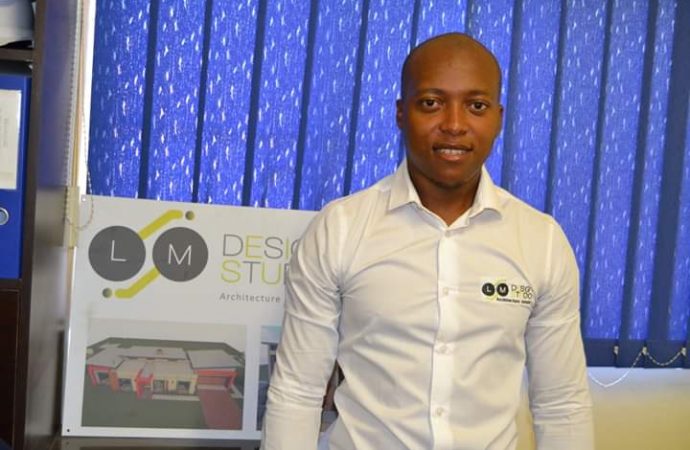 Hailing from the rural village of Caguba in Port St Johns, Sibabalwe Lunika (26) is one of the young entrepreneurs in Kokstad who are an inspiration to young people.

With no capital, Lunika established an architectural company called LM Design Studio in partnership with a friend, who died in a car accident a few months after the launch of the company.

When LM Design Studio was started in April 2017, the company had no office equipment besides two laptops. Through hard work, the company slowly grew from designing small houses and garages in Kokstad to the point where they were called on to design commercial buildings and residential flats and they even signed contracts with big companies.

“I tried my best to advertise the company to businesses and municipalities and, as a result, I now have clients in Mthatha, Durban, Matatiele, and other areas, including other municipalities,” said Lunika, who said that, although he never knew the word “architecture” when he was at primary school, he knew what path he wanted to follow.

When he graduated in 2015, Lunika worked at an architectural company in Kokstad where he learned a great deal. While there he was inspired to open his own company.

Lunika said losing his business partner in November 2017 was heart-breaking, and it affected the production of the company for a period of about two months. He said his family supported him in dealing with the trauma.

In the next few years, Lunika hopes to expand his company and open more branches in Mthatha. He is also passionate about his community, and often donates gifts to orphans and partners with local stakeholders on charity programmes.

“I also help other small businesses to grow and unemployed youth with business ideas. Small businesses need to be supported by government because they contribute to the growth of the economy and create employment. As a young person, I believe in hard work to keep the company growing. I also want other youth to do the same to change the country,” he said.

This article was first published on East Griqualend